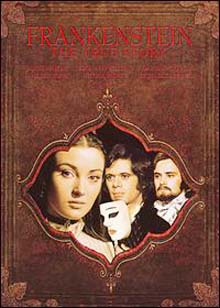 A 1973 British made-for-television horror film loosely based on the book Frankenstein by Mary Shelley.

In 1830's England, young medical student Victor Frankenstein (Leonard Whiting), following the drowning death of his beloved brother, bitterly renounces God and vows to find the secret to creating life himself. He crosses paths with the eccentric Dr. Henry Clerval (David McCallum) who shares his quest and takes the younger Victor under his wing. When experiments in reanimating insects and a severed human arm succeed, the two prepare to bring to life a man whom they have assembled from body parts of victims of a mining accident. On the eve of their attempt, Henry discovers that the process will reverse itself and dies from heart failure before he can sufficiently warn Victor. Committed to carrying on his late friend's work, Victor forges ahead and brings to life a creature of incredible beauty and innocence (Michael Sarrazin). The two develop a close, affectionate relationship and Victor looks forward to presenting his creation to society as "the new Adam." Inevitably, the flaw in Clerval's procedure results in the grotesque distortion of the Creature's appearance, causing Victor to callously reject him. The Creature attempts suicide but to his dismay finds he can't be killed. He leaps from the White Cliffs of Dover, and Victor assumes he's seen the last of his bungled handiwork.

The Creature, still very much alive, wanders the countryside and befriends an old blind man (Sir Ralph Richardson). He also develops an infatuation with his daughter Agatha (Jane Seymour) whom he observes in secret. In a tragic accident Agatha is killed, and the Creature brings her to his birthplace, seeking Victor's aid. Instead, he finds the lab has been taken over by Dr. Polidori (James Mason), a former colleague of Henry's.

Victor meanwhile has moved on, returning his attention to his fiancee Elizabeth (Nicola Pagett) and attempting to live a normal life. His plan is thwarted by Polidori, who uses the Creature to forcibly enlist Victor's help in bringing yet another body to life, this time female. The result is Prima (also Jane Seymour), a stunning beauty with an evil, cold heart. Finding no further use for Victor's creature, Polidori locks him in his laboratory and sets it ablaze, while Victor stands by helplessly.

Polidori grooms Prima and schemes to use her to gain entree into the cream of society and seats of political power. Prima's coming-out party is memorably cut short by the arrival of the uninvited Creature. Events come to a head when she viciously attacks him, inciting his jealousy and murderous rage.

Their life in a shambles, Victor and Elizabeth charter a boat to escape to America, unknowingly accompanied by both Polidori and the Creature. After a storm and much violence only Victor and his Creature are left on the ship. Wishing to escape humanity, the Creature steers the ship toward the North Pole. Victor and the Creature confront each other for a final time in the Arctic wasteland.

Re: Frankenstein: The True Story

I remember this one well. I bought the dvd when it finally came out in 2006. The monster isn't green with a flat head and tuning knobs in the neck. He looks like you and me but turns grotesque as the experiment reversed itself thru time. Very good movie for the budget they had back then (for t.v.).